How aware are we regarding CaRgO bIkES?

Let me tell you an example, IKEA in Denmark provides free trailers and Velorbis bike for their carless customers. You just need to leave a deposit and return the bike afterwards.

Photo: Per Wadskjaer for IKEA

The amount of cyclists in Denmark and their cargo bike culture has pushed IKEA to think "cargo". Such an incredible idea!! Of course, I doubt something like that can be implemented here, at least now bearing in mind, among other reasons, what happened to a mother carrying her kids with a cargo bike, definetely, there is still a lot to do. Mum X, as the online newspaper called her, was stopped by a police officer for "breaking" the law carrying two kids in a bike, although, there is no such offence unless, the bicycle is not built for carrying kids or cargo. Fortunately she was not given a ticket but can you imagine the mum's mood after that? I can! :-O (More on http://www.bikebiz.com/news/read/dear-police-officers-this-bike-is-street-legal/011325). What happened made me think that cargo bikes are not very usual in our daily landscapes, neither for police officers. I am sure they are not so popular yet because not so many people know them, once you have seen some, it is very difficult to do not fall in love with their cute style. 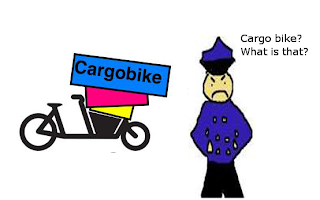